Utilising the Media to Boost your Business’s Visibility

Listen to this podcast on

Do you want an unfair advantage over your competitors? Do you want to dominate in your area of expertise? You are listening to Business Life Hacks. Learn to influence consumer psychology and shortcut your way to business success with tips, tricks, and hacks from award-winning digital agency, JMarketing.

This week, we’re talking about a really productive habit that you should really implement, and it is: reaching out to reporters and media publications to get your name and your business mentioned in the media.

It’s a lot easier to do than you might think, but most competitors are probably not doing this. So it’s a chance for you to stand out.

So Josh, why should business owners be focused on getting into the media?

All right. I want to look at this from a slightly different angle to what most would. Most people think of the obvious – “If the newspaper runs an article on me and my business, so many people would flood through the door”. Absolutely true.

But getting in the media for that sort of reason is ridiculously difficult. You’re probably going to need to run an expensive event or give away money to build an orphanage or something big and unique, which most companies aren’t in a position to do.

The sort of mentions that you’re going to get in the media are normally based on your expertise, your opinion, or your statistics. And in doing that, it gives you three major benefits. You get credibility, you can use that credibility whenever someone presents, you can say – “as seen on New York Times.”

That’s credible. It’s going to give you exposure. People will see your name over and over again. Dan Lemp, oh, there’s another excellent SEO tip from Dan. And finally, and arguably most important, it’s creating SEO backlinks to your website from very reputable publications.

That’s worth its weight in gold in the long term, not just the short term.

Yeah, because if you can get some really high quality backlinks from publications, that really helps your SEO and increases what is known as your domain authority.

That means that Google sees your website as more authoritative because they see that reputable sources are linking to your site. So thereby, they think that you are a more reputable source.

So, how would someone actually go about doing this and getting those backlinks?

So there are two ways of doing it. One is an expensive event or promotion or something totally unique. And believe me, there’s ways you can do that. Just as a short example, there’s a speed camera in Australia, where I used to have beer every Monday night with my team and we would see the speed cameras go off, constantly.

One idea we had (we never actually did), was to go down and stand with the giant sandwich all around us saying “warning speed camera behind us”. And then on the other side of that speed camera, there was another set of lights before a major road. We were going to organize a charity to collect donations and have another guy with a sandwich or saying, “If we just saved you a $300 fine, donate to the charity at the lights”.

Now you can see that that’s quirky; it’s newsworthy. We could have tied it into how we think differently about not-for-profit marketing and how there’s a social contract when you’re advertising. All of that is newsworthy; and if you were reporter, you’d be interested. It’s also a hell of a lot of logistics and cost.

So let me give you a much easier way to get into the newspapers, the media, without having to go to the expense and the time. This is a habit that I have every day, three times a day. When I first get up around lunchtime (I actually have about five minutes to lunchtime), and before I log off for my afternoon break – and it is answering media call outs.

There’s a whole ton of publications. Every country has their own. The best known is called HARO (help a reporter out). And the way it works is that media commentators send out requests for comments. And they’ll say something like – “I’m writing an article on ‘how to sell accounting courses online’. Looking for someone who’s done successfully to give some insights”.

They ask anyone to respond to these. It’s totally free and they choose the best ones to put into their publication. Normally, you get an SEO backlink; you get a name. Sometimes you can get your face in the online newspapers, blogs, wherever.

Okay, cool. So how does someone write a response to those call outs that will actually catch the attention of the reporter and more likely get them into the media?

That is a skill. And this is something that a lot of people just haven’t worked out, even though it’s common sense. Reporters are time poor, and a lot of them get paid only on the articles they write that get accepted. So your job is not to think of it as just a story, but think about the writer as a person and how you can make their life easiest.

So, here’s what not to do: do not write back to these and say, “I’m an expert accountant. I can answer this”. You’ve already lost. You need to write a quirky answer. You need to be bold. You need to stand out and just hope that they use you.

I write about five of these a day; so about 25 a week. Normally, I’ll end up in between two to five publications. Some of them very, very small. Some of them big; some of them not really related to our topic at all, but that’s just the way that it runs. Sorry, specifically the skills Dan, sorry, I got a little off topic.

Timely response. you need to respond to their emails as they come through. That’s why I have three specific times I respond to these. Human behavior is that we massively weight the first things we receive. If we receive a quote from someone, we’re very likely to put way too much weight onto that quote and compare everything to it.

And we’ll want to take the first one. So always try to be the first responsive. It’s gotta be well-written; you cannot have grammar errors. If you’re not using Grammarly, go get it right now. You definitely need to use data and examples. And the more of that you can, the more trustworthy your point of view is.

But this is the big kicker – Dan, what do you think I’m going to say is my very last and most important point?

Yeah. The same thing I always say: polarise and be bold. So when I write, if someone’s saying, “I need someone to comment on the state of the economy right now”, don’t just tell everyone what they already know. That’s not going to get you in; take a quirky, interesting view, and write an interesting quote for them.

Say something like: “Right now, the USA is printing money like playing monopoly and the banker just doesn’t care. And the impact of this is going to be far reaching. We just need to look at the great World War II. When Germany was printing money, they printed 50% of their GDP. And look what happened to inflation.” Now you don’t need to be alarmist, but you need to be interesting and take an interesting view on things.

We had a really good example for our agency where: we got written up for the way we were using Facebook, because we were building a community for a client. That was kind of interesting.

But what was really interesting, was that were using that community to then survey the community on what products they liked. And we were able to use that before actually making the product. We had 6,000 people who were answering “Yeah, I absolutely love the shirt. I would buy this.”

Awesome. Well, Josh, that is some really actionable advice that business owners should be able to use. And hopefully business owners, you do action it because it really makes a big difference.

For me as an SEO guy, I really love to see when clients are really putting themselves there to get those high quality backlinks.

So if you have any further questions about the details of this or how to do it, just write to Josh, josh(@)jmarketing.agency. Josh, thanks so much for all that information.

This is very closely related to what we’re talking about today. And it’s probably something a lot more relatable for other business owners.

So until next time then have a good one. 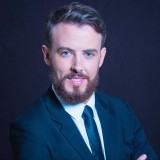 Dan leads the JMarketing SEO department. An extremely analytical mind, he is fascinated with the questions of 'Why', 'How', and 'Is there a better way'? Through Dan's research and experimentation, JMarketing have unlocked a host of best practices and optimisation tricks for our clients.